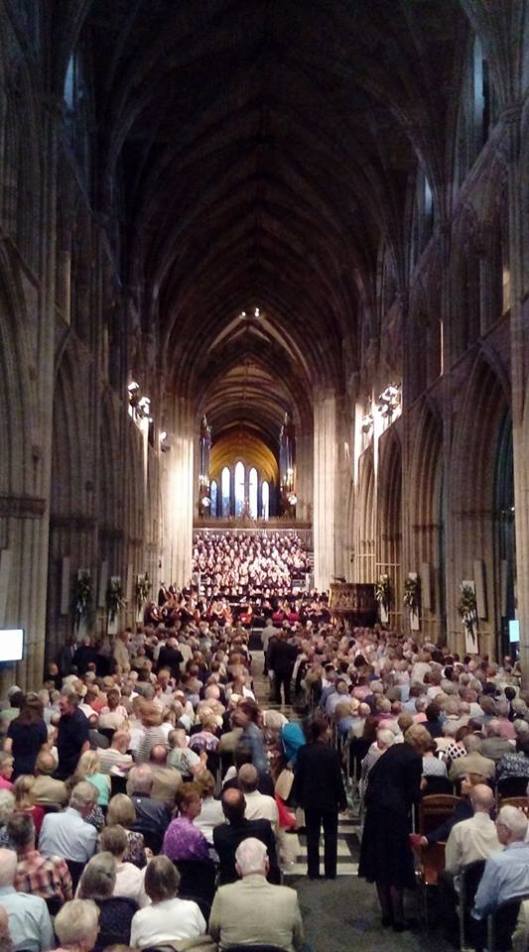 The Birmingham Post isn’t always able to post online everything that I’ve written for its print edition, so – after a suitable time lag (ideally you should go out and buy the paper) – I’ll be posting my recent reviews here. As per the print edition, they’re all fairly concise – just 250 words. This is of a performance at Worcester Cathedral on Tuesday 25 July 2017.

There’s something very special about hearing The Dream of Gerontius in Worcester Cathedral during the Three Choirs Festival. “There is music in the air”, said Elgar: and when the very stones of the Cathedral seem to vibrate, as they did tonight when the organ held a deep, quiet pedal-note at the end of Part One, you can almost sense Sir Edward’s invisible presence.

So this performance by the Philharmonia Orchestra and the Festival Chorus under Martyn Brabbins had a lot going for it even before a single note had been played. With the performers located (for the first time in many years) at the east end of the nave, the clarity and transparency of the orchestral sound was evident from the outset, as Brabbins gently blended the misty colours of Elgar’s Prelude.

That set the tone for a performance that was expansive (new layout or not, the Cathedral acoustic doesn’t allow much leeway on that front), but consistently lyrical and loving. David Butt Philip was almost a bel canto Gerontius, and while his voice felt perhaps too fresh for the dying man of Part One, his vocal radiance and sense of wonder made Part Two glow. As the Angel, Susan Bickley had “something too of sternness”, cresting her Alleluias like a Valkyrie – but found limitless compassion in her great Farewell. Roderick Williams was both a warmly expressive Priest, and a majestic Angel of the Agony.

Chorus and Orchestra responded in kind, with the Girl Choristers of Worcester Cathedral giving a gleaming golden top to a Festival Chorus whose pianissimos were luminous, even if they struggled for clarity in the Demons’ Chorus and Praise to the Holiest. But the spirit, clearly, was willing: and in The Dream of Gerontius, nothing matters more.