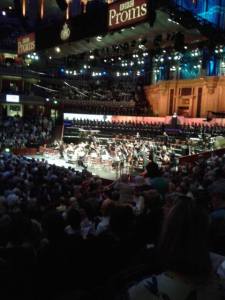 View from my seat, hastily taken on a shaky camera-phone!

After a long weekend in Budapest, it was a bit of a slog to travel straight from Lichfield to London for the CBSO’s final appearance with Andris Nelsons as music director, at the BBC Proms. London-based colleagues tend to assume that everyone cheerfully dips in and out of the Proms all summer. What? – you missed the late night Prom on Wednesday? But you are going on Friday, surely? But it’s so affordable! I find it harder to choose which ones not to go to!

Of course, if you live anywhere beyond Zone 5, an evening concert at the RAH probably means an overnight hotel stay or a hot, breathless and frantic sprint to Euston the minute the applause starts, a ticket for one of the expensive trains (the cheap ones all finishing at about 8pm) and an exhausted 2am return home. I went for the latter option, and for once I’m glad I did, even with the Royal Albert Hall’s life-sapping acoustic. It was one of those occasions where personal emotion takes precedence over critical detachment – something you’ll only really understand if you’ve been in Birmingham for the last 8 years. I’m not a fan of Beethoven’s Ninth: last night, though, I heard it say something new, surprising and very moving.

There’s absolutely no sense that the CBSO / Nelsons relationship has run its natural course – I’ve never seen an orchestra and conductor have so lengthy a honeymoon, and last night’s performance made it sound as if the relationship is only now reaching its artistic peak. The loss of Nelsons is bitterly felt in Birmingham. It’s untimely, to say the least, which made last night a doubly poignant occasion. Here’s my Birmingham Post review.

1 thought on “CBSO and Andris Nelsons at the Proms”