The Birmingham Post isn’t always able to post online everything that I’ve written for its print edition, so – after a suitable time lag (you should really go out and buy the paper!) – I’ll be posting my recent reviews here. As per the print edition, they’re all fairly concise – just 250 words. This is of a performance at Warwick Arts Centre on 23rd April 2015. 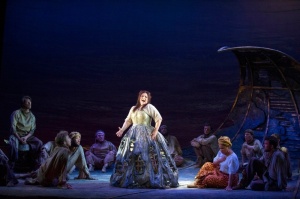 Donizetti’s 1833 opera Il furioso all’isola di San Domingo is a real rarity. The Cervantes-derived story – of a nobleman unhinged by heartbreak, on the loose in the Spanish Caribbean – sounds bizarre, and sure enough, this is one of those operas whose plot summary reads like an absolute car-crash. In fact, as Iqbal Khan’s new production for English Touring Opera demonstrates, it makes perfect dramatic sense when imaginatively staged – and packs a real emotional punch as it does so.

It’s an opera semiseria: a misleadingly unwieldy term for a drama that interleaves comedy and pathos rather more powerfully (to this ear) than some of Donizetti’s outright tragedies. And it could hardly be better-served than by Khan’s production. Florence de Maré’s semi-abstract set suggests the stormy seas that drive the plot, while Mark Howland’s lighting poetically evokes both the colours of the Caribbean evening and the characters’ emotional state.

At the heart of it all was Craig Smith, as the “Wild Man” Cardenio himself: Smith’s warm vocal tone and sympathetic characterisation (little vocal tics suggested his mental affliction) made him a figure of wounded dignity. Sally Silver as his penitent wife Eleonora and Nicholas Sharratt as his brother Fernando delivered swashbuckling high notes and moments of poignant sorrow; Silver, in particular, made convincing emotional sense of the redemptive final scenes.

Peter Brathwaite played the slave Kaidamà as light relief, somewhere between Ariel and Leporello; Njabulo Madlala and Donna Bateman made their roles as sympathetic as slave-drivers can be. The orchestra under Jeremy Silver rose to the vocal characterisation on stage with some wonderfully stylish playing: string portamenti and vibrato-free passages brought out all the fantasy and colour of this entertaining and touching operatic rediscovery.