The Birmingham Post isn’t always able to post online everything that I’ve written for its print edition, so – after a suitable time lag (you should really go out and buy the paper!) – I’ll be posting my recent reviews here. As per the print edition, they’re all fairly concise – just 250 words. This is of a performance at the Hagley Music Festival on 22nd April 2015. 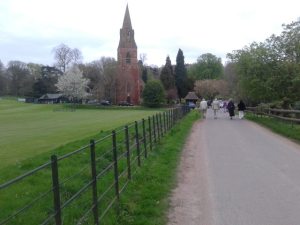 The corner of the Midlands around Hagley has produced a disproportionate amount of words and music: think of William Shenstone, Francis Brett Young, and more recently Simon Holt’s opera Who Put Bella in the Wych Elm? Now the list is joined by Andrew Downes’ The Ballad of St Kenelm, commissioned by the Francis Brett Young society and premiered by members of the Central England Ensemble and community members as part of the 2015 Hagley Music Festival.

It’s a sort of musical mystery-play, in the spirit of Britten’s Church Parables. The poem is by Brett Young, retelling a legend of the Clent Hills, and while it’s worn better than you might expect (though there was one line which, while maybe acceptable in 1944, jarred badly today), it probably works better as a libretto than as literature in its own right.

Downes divided the verse between a narrator (the wonderfully sonorous Haydn Thomas), a small group of amateur actors (Oscar Price deserves special mention as the seven year-old King Kenelm) and a soprano. His daughter Paula sang that role tonight, bringing purity and an affectingly plangent tone to Downes’s lyrical, plainsong-like vocal writing. Conductor Cynthia Downes drew out the colours of the attractively pastoral score; the small orchestra clearly enjoyed Downes’s splashes of polytonality and the imaginative instrumental detailing in the work’s central lament.

The ending might, perhaps, have been broader, but Downes’s sincerity can’t be questioned. This was music deeply rooted in its community, and it’s a source of great sadness that ill health prevented Downes from attending. Hopefully he’ll be able to hear repeat performances at the Bewdley and Winchcombe festivals, with the same highly committed performers.