The Birmingham Post isn’t always able to post online everything that I’ve written for its print edition, so – after a suitable time lag (you should really go out and buy the paper!) – I’ll be posting my recent reviews here. As per the print edition, they’re all fairly concise – just 250 words. This is of a performance at Wolverhampton Grand Theatre on 13th April 2015. 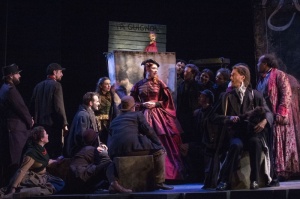 Could you love anyone who didn’t love La Bohème? Illica and Giacosa’s libretto sketches out the discomfort and poverty with deadpan precision. But once Puccini does his thing, who wouldn’t wish themselves in that freezing Parisian garret, losing their heart while the smoke of a thousand chimneys curls into the evening sky?

Yet Bohème is an opera that thrives on realism. And in James Conway’s new production for English Touring Opera, that’s what it gets, in a rough, bracing blast. There’s no watercolour sentimentality about Florence de Maré’s grungy, semi-abstract sets: a column of skulls stands macabre sentry over Act 4 and Act 1 is so dimly lit that the performers’ faces are sometimes barely visible.

But the strengths of this approach shone through in the interaction of the characters. There was a plausibly combative edge to the flatmates’ banter, and for all the sheen of his singing, David Butt Philip’s was a darker and more brusque Rodolfo than we’re used to seeing. Ilona Domnich matched him with a hesitant, nuanced Mimi; for once, you could spot the potential faultlines in their relationship.

They headed a cast in which there were no weak links; Grant Doyle was a likeably bluff Marcello, Sky Ingram an arresting Musetta with a vampish edge, and Njabulo Madlala and Matthew Stiff rounded out Schaunard and Colline engagingly. As always with ETO, lustrous singing came as standard, and under Michael Rosewell the orchestra made the score sound exuberantly fresh. Birmingham is fortunate to have opera of this quality so close at hand; if you haven’t yet made the short trip to see ETO, you’re missing something wonderful.